Wherever you are in life, keep in mind that the Wellness Journey invites everyone and there is no finish line. Whether you are just beginning or a veteran, youthful or life-experienced, you can count on me to meet you where you are.

Wellness encompasses many dimensions, and all affect your health. With over 30 years of experience in health promotion and wellness, I am ready to help you with your goals. Are you ready to embark on the Wellness Journey?

Think of life coaching as having a personal trainer for your life! The only difference is that I don’t tell you what to do. Instead, I facilitate powerful conversations that stir up your motivations, strengths, and “knowledge within” so that you may start achieving your goals. If you want to live a more intentional life, start here.

Most coaching takes place over the phone, which allows me to coach you anywhere and anytime! Please let me coach you forward in your life! 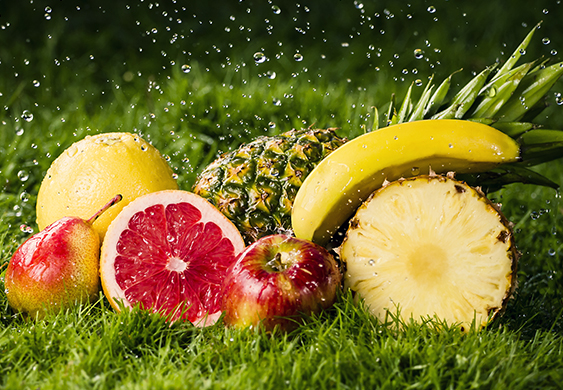 Would you like to be set free from chaotic eating, fad diets, emotional overeating, fast food dependence, and nutrition misinformation? Are you interested in the learning how to eat better or perhaps gain the winning edge in athletic contests?
As an advocate of HAES (Healthy at Every Size) I will treat you with respect and dignity. I don’t weigh clients or use the BMI. The focus of my nutrition practice is promoting optimal health and well-being.

Bottom line: I WILL help you reach your nutrition goals!

A few years ago we learned about Green Tuesday.  The purpose of this relatively new “shopping holiday” is to promote sales of environmentally-friendly items.  This is not to be confused with the Green New Deal, which is a paradoxical narrative created by climate change advocates who don’t comprehend that flying in their private jets uses up fuel or that charging electric cars requires energy.

Green Tuesday seems like a new concept, but truly, my mother invented it back in the 50s.  While there wasn’t an online venue for indulging in recycled items, this principle guided our family finances, and instilled in all of us a Green Mentality.

Our mother was around during the Great Depression, and she learned to be frugal and creative in recycling.  When practicing math problems, we had a “scratch paper box” – used envelopes, backs of business letters, etc.  It was considered wasteful to write on a clean sheet of paper. To this day, I write on the backs of used envelopes.

My mother had eight daughters, ending in twins. I am one of the twins. You can bet we didn’t see too many brand new clothes.  Our favorite clothing brand was Hand Me Down.  We wore each other’s clothes, shoes, costumes, boots, mittens, etc.  There was no distinction of who owned what; we simply had a community Mitten Box, Halloween costume box, Boot Box, Skates Box, etc.  First come, first served, and we didn’t know there was such a thing as wearing your true size.  Close was good enough.  We never thought to whine because things didn’t fit just right.  We were happy to be in the game.

I have a pair of vintage Levi orange tab jeans that I saw 3 of my sisters wear back in the 60s. I wore them, too when I was at my best athletic fighting weight. My sister found them recently in a drawer!  They no longer fit, so I posted them on ebay.  They are quite fashionable – straight leg, naturally distressed, classic waist, and made with strong, sturdy denim.  They don’t make ’em like that anymore, and it didn’t take long to sell them to an international buyer for a mere $160.

Is it any wonder I am nostalgic about vintage items?  Truth be told, I wasn’t raised in a disposable era…. no paper plates or Styrofoam cups for our family, just lovely old china.  Our mother didn’t have an automatic dishwasher.  She always said she didn’t need one because God gave her eight hardworking dishwashers.

These skates above were worn by all my older sisters, many of their children, neighbor children, and since I was the last to leave the nest, they now serve as a Christmas ornament in my living room.  I wasn’t kidding when I said my mother invented Green Tuesday.  It just makes sense to use things for years and years before demoting them to another purpose.

Ashtrays are almost a thing of the past with indoor smoking restrictions, but is it necessary to throw them away?  How about converting them into teabag holders?  Not too many people serve gravy often, but is that reason to toss the gravy boats?  Gravy boats with a nice lip on them are perfect for holding my watercolor brush when it needs to dry.  What about that bone china teacup with a chip on the rim?  It would love to hold your loose change! 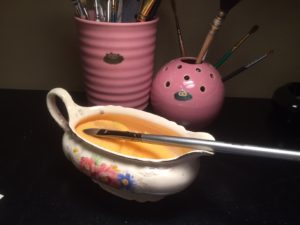 Note the Rosemeade pottery behind the Paintbrush Boat.  The vase has a chip, but one wouldn’t notice with all the paint brushes in front of it.  The round flower sphere holds paintbrushes and pencils – there’s no rule that it must hold flower stems.

I could go on and on, but you get the picture.  Before you throw something away, give it another viewpoint – what other job could it perform?  It’s like being injured and going back to work. You may get donated to another department to do paperwork, but it’s better than losing your job or feeling worthless.  That little chipped cup is in the same boat. If it isn’t totally broken, consider giving it a new role.  It would rather switch roles than find its grave in  the landfill.

When gift-giving, consider vintage or used items.  No, it isn’t cheap of you… it’s thoughtful of you!  For example, pick out the best book you read this year, wrap it up, and pass it on.

If you have young children or grandchildren, rotate their toys.  This means to pack up half of their toys for months at a time, then when Christmas rolls around, you have a gift box to choose from, instead of spending more money.  My family thought I was strange when I gave my 1 year old an old wooden spoon and a Cool Whip container for Christmas.  When he opened it, his eyes grew wide – he got a “drum set” for Christmas and it didn’t cost a penny!  The battery-operated toys the relatives bought for him could not compare to his drum set.

You know your children. You probably know they would rather have your time than presents.  Consider a Green Christmas where everyone looks to their own possessions for gift-giving.  You might be surprised at how much time and money you save.  Best of all is the long-lasting legacy of recycling and repurposing.  Priceless.

If you want to create a new slate with a decluttering, recycling mindset, consider investing in one-on-one coaching with Bev.  New Year, clean slate!  Contact Bev at [email protected] for more information..